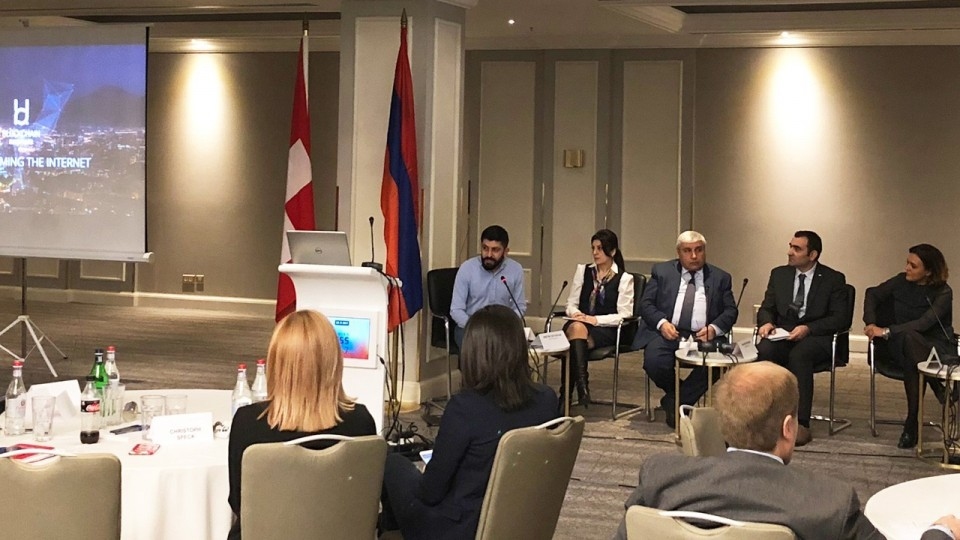 The Embassy of Switzerland in Armenia invited promising entrepreneurs to the first «Swiss-Armenian Business Day 2017» conference which took place on the 29th of November in Yerevan. Among the invited guests and speakers was Blockchain R&D Hub co-founder and CINO Arman Aleksanian.

20 years ago, Switzerland and Armenia exchanged goods for hardly CHF 2-3 mln. This year alone, our trade exchange already approaches CHF 170 mln. Switzerland has been among Armenia’s top ten partners in trade and direct foreign investment. 10% of the jobs created by Swiss companies in Armenia are located in Research & Development. Given these dynamic developments, the Swiss embassy in Armenia actively supports the investment and other business development initiatives between the two countries. Among the audience, there were many investors, representatives of the business community, Government representatives, the First Deputy Minister of Economic Development and Investment of Armenia, Executive director of the European Business Association, journalists, and TV-crews. Different sectors were presented, such as Pharmaceuticals, Finance, Media, Research and Development and IT.

Arman, as the first speaker of the panel, spoke about Blockchain R&D Hub, discussed what is Blockchain and how it could be used to improve current systems. He also introduced PUBLIQ Foundation to the audience - an independent, fair and highly secure distributed ecosystem defining the new generation of media. During his speech he highlighted how Blockchain R&D Hub combines the advantages provided by both Armenia and Switzerland, where the Hub is building its next home. While Switzerland offers fintech-friendly public regularities, highly advanced infrastructure, government support, access to Europe, Armenia provides great resources in computer science and tax concessions. The parties highlighted how it’s tradition in hightech last long into the USSR, that it’s one of the few countries that teaches robotics besides chess already in primary school, and that Armenia is considered the ‘Silicon Valley’ of South-Caucasus. As Blockchain R&D Hub builds its offerings in Blockchain technologies and services, Switzerland will start serving a role of its European center.

The panel participants highlighted the importance of building further bilateral business relations and commented highly on the efforts of the Swiss embassy in fulfilling the role of the liaison and facilitator of these processes.